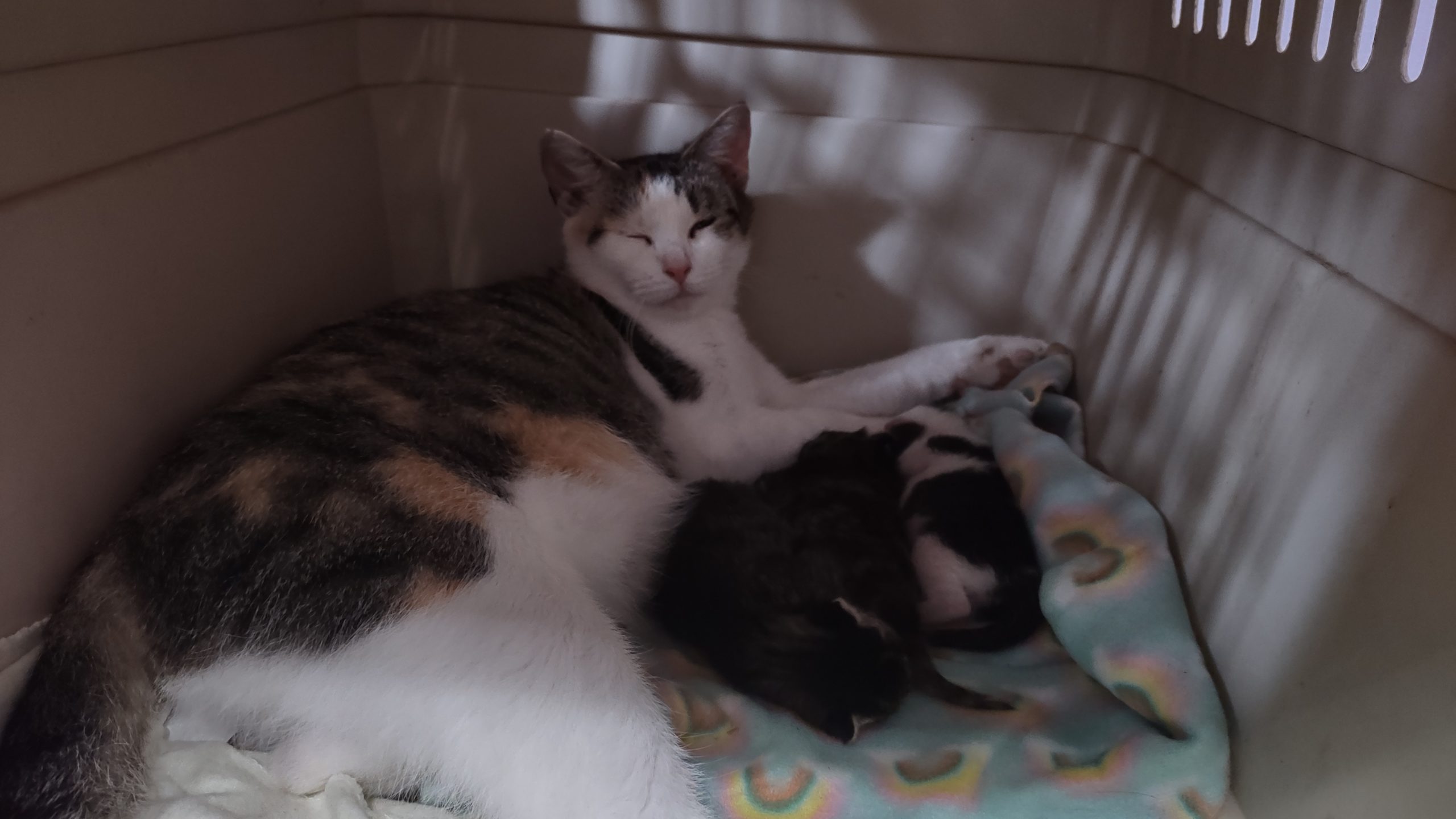 Not long after we took Sylvie in, we began to realize she was quickly gaining weight. Since she was looking pretty skeletal when we took her in, we didn’t think too much of it at first. We were happy to see she was getting the nutrition she needed and just feeling and looking better overall. However, she continued to grow and near the beginning of July it finally dawned on us that she was pregnant… again.

An Unplanned Pregnancy… How Could This Happen?

To say we were confused at first is putting it lightly. All of the cats here at The Cultured Cat are spayed/neutered so we know that none of them could have gotten her pregnant. This means that Sylvie got pregnant again while she was still outside, before we even brought her and her kitten Yuki inside. She must have been early enough along in the pregnancy when she arrived that it wasn’t noticeable at all.

That means that not only did this sneaky momma cat convince us to take in the single weaned kitten she brought over at first, but she managed to sneak in a whole litter right under our noses! That’s some next level cat stealth in action.

Watching and Waiting for Kittens

We weren’t sure exactly when these kittens would be arriving, but as Sylvie kept growing and looking more and more uncomfortable, we figured it would be pretty soon. We set up a nesting box and started watching for signs of Sylvie going into labor.

Then on the evening of July 23rd, Yuki went back to trying to nurse Sylvie and these two were cuddling and playing all over each other in ways we hadn’t witnessed before. Later that night we heard the soft little mew of the first of Sylvie’s kittens coming into the world.

Kitten number 1 arrived around 10:30pm on July 23rd. Sylvie had a 2nd kitten right around 11pm, but something seemed off with the 2nd kitten. Sylvie was being protective of them both so we couldn’t get a good look at the kitten that first night, but the umbilical cord looked funny and this one was less active than the first. Both appeared to be nursing, though, so we let Sylvie take the lead that night and left her alone with her newborns. A few hours went by without any more births and so we though Sylvie was done after having a small litter of just 2 kittens.

A Sad Turn of Events

The next morning we were able to get a better look at the kittens while Sylvie was eating. Kitten #1 seemed to be thriving and had some orange and white spots start to appear. This meant that this kitten is a calico like its mother and is almost definitely a female.

Kitten #2 looked more like a tortie. However, on closer inspection, we noticed it was born with some birth defects of varying severity. It was difficult to even find the kitten’s ears as they were so small. The main problem we noticed, though, was that it seemed like part of its intestines were on the outside. (The kitten had been laying on its tummy the previous night so we didn’t get a good look at this.) Kitten #2 also felt cold to the touch and wasn’t as responsive as Kitten #1. Something was definitely wrong.

Unfortunately, it was a Sunday so our vet was closed until the next day. We immediately went online and started doing some research. What we found, however, was disheartening. It seems like this birth abnormality is just something that happens on occasion. While surgery was option, the chance of survival was extremely low with or without the procedure. On top of that, the kitten felt so cold that we were sure he had not been nursing properly and probably wouldn’t survive the drive out to the nearest emergency vet.

After much thought, we made the incredibly difficult and heartbreaking decision to let the kitten experience what little life it had left in a familiar environment instead of getting poked and prodded, dying alone and afraid. It passed just a few hours later, cuddled up with its mom and sister.

Later that night, Sylvie surprised us once again by giving birth to another kitten. Kitten #3 emerged looking much different than the first 2. It’s a fully black and white kitten! It was a full 24 hours later, around 10:30 pm on July 24th, when kitten #3 made its appearance. It’s arrival seemed like a welcome surprise at the end of a hard day. We left Sylvie alone for the night around 12:30 am on the 25th.

She gave us one last surprise when we went to check on her in the morning. That’s when we found 3 kittens in her nesting box instead of the two we were expecting to see. Kitten #4 must have been born sometime in the early morning and was our biggest shock yet. At first it appeared to be a solid tabby, but has since been developing some white around the face and tummy. Sylvie now has 3 living kittens from this litter, each born on a different day.

How Everyone is Doing Now

We’re waiting to hear from the vet who works with foster cats in the area so the kittens and Sylvie can get their first check-up, but appointments are extremely backed up at the moment. Sylvie is nursing the 3 kittens and they all seem to be in good health. She’s has a very healthy appetite and they all are nursing regularly too. Eyes are still all shut and only the first one seems interested in moving all around. From what we can tell, everyone is thriving. We’re hoping that the hard part is over and from now on we’ll be watching these newborns grow into happy and healthy newborns!

We plan to start looking for forever homes for the kittens once they begin the weaning process. We aren’t putting an exact date on getting them out of here because we want everyone to wean naturally. They will all definitely be spayed or neutered and have their first shots before leaving The Cultured Cat. We’re carefully looking for prospective adoptive cat parents for all our fosters, starting with Yuki. All of these cats deserve to find a great forever home and we really hope to help them find the best fit.

Everyone is doing as well as can be expected as of now. The kittens love to cuddle and Sylvie has made sure we all know that Kitten #1 is her favorite. While she is fine with either of the other two being held, she’s quick to grab Kitten #1 and bring her back to her nest if we even try to grab her. For now, we’re enjoying watching these little fluffs grow.